Being completely honest, none of the original founders of the clan had any intention of setting up something new – we had met and were helping grow a clan which can run by the owner of a game server provide (very handy for…. servers, FarCry and TeamSpeak). Although that sounds great, as has been common with other clans across the years, the admin rights and ability for members to make changes didn’t exist, the leader doing whatever he wanted, and leaving us plebs to fend for ourselves.

In early 2007, the Game Connectors clan website was hacked – the site content and admin access being removed from the clan leader. To credit the clan leader, we was able to reinstate the site, even adding a mocking message for our hacker. Two days later, the same hacker took down the site again, and this time there was no response from our leader. Having spent so much time building relationships and the clan, we were keen to take the initiative to setup something which we could run and control.

Nightkiller took the initiative and setup a temporary forum, somewhere away from the main site where we could ride out the storm. Nighty did all the hard work and we were all relieved to get a site that was safe and secure, where we could maintain conversation and interraction.  It quickly became clear that our old clan leader wouldn’t be returning, however, for Nighty and I this opened an opportunity. We began chatting regularly about what we would need to have our own clan, whether it was sustainable (time, work, money etc.), and whether our fellow  clanmates would follow us.

The following weeks went by very quickly, arranging server and web hosting, domain names, purchasing a teamspeak, building a website (see the top of the page) and getting the members together. We were extremely lucky because we had, and still largely have, a great core of members who have stood by the clan through thick and thin.

For a clan borne out of adversity, the efforts involved in the original creation built the foundations of the group we have today. We’ve always tried to provide an environment where people can be themselves, enabling teamwork and real relationships. The success is evidenced by our successful LAN parties, where we’ve had as much fun in real-life as online. 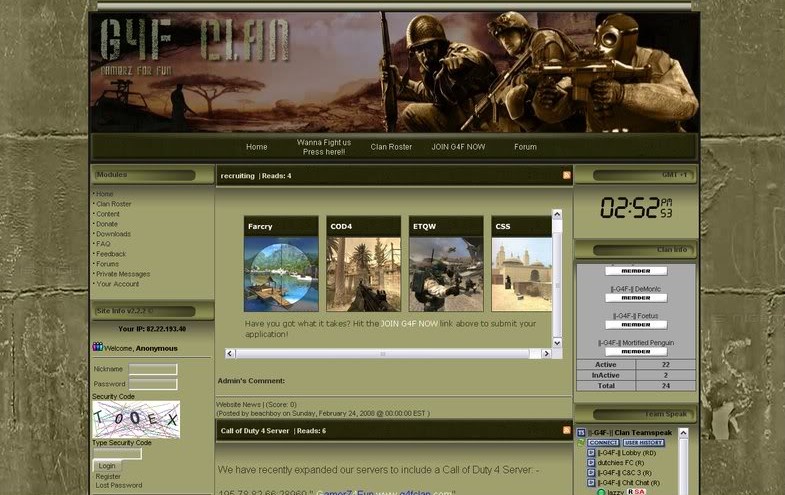